Floating around a lake, stuffed into a tube is to many a gentleman fly fisher like replacing a chess set with checkers pieces. It’s still a game but lacks the same finesse and skill or so many traditionalists would have you believe. 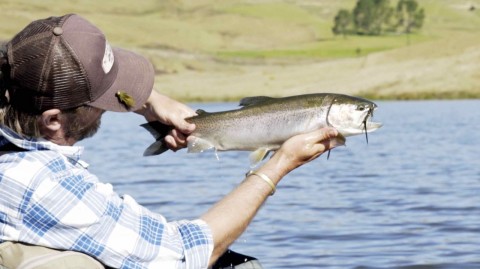 But is it legalized trawling?

Gently finning with your line in the water is how you get from bank to bank and anyone who claims they have not caught a Trout in this fashion would have me raising an eyebrow about any of their fishing tales.Yet, to aimlessly kick around a dam will generally frustrate you and your fellow anglers and yield not much more than severe hamstring cramps.

A V-Boat definitely makes the job a whole lot easier, not too mention more comfortable, but the fact that you can access so much of the dam means that it does require a definite strategy. 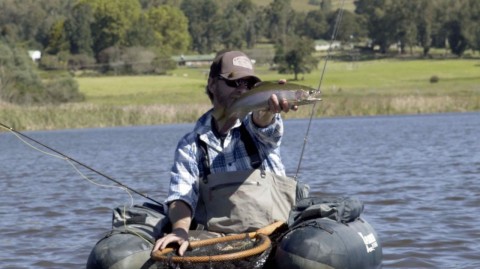 When to tube is the first decision you need to make and early morning and late evening is when you don’t need to launch, as the Trout are in the upper reaches of the water column anyway and very often patrolling the shoreline, low light making them less vulnerable to predators. 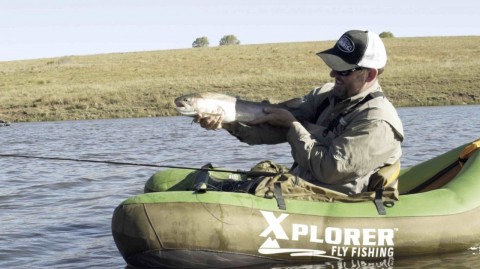 Once afloat, it’s Where to focus your effort.

Trout, like any other resident fish are structure orientated, so you want to be casting into this structure, not over it or sitting on it. Positioning yourself off solid weed beds and bank, working your fly around this shelter and food source will give you reward to match your casting enthusiasm. 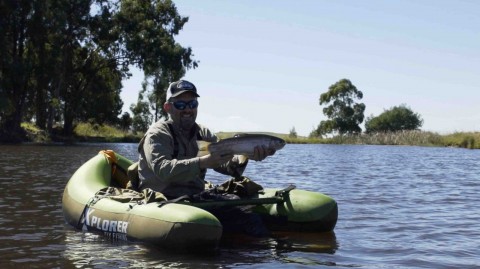 But What fly? I have recently had an epiphany in this respect.

After countless hours of fumbling at the vise and enduring ridicule at my imitations from our social brethren, I finally tied the definitive pattern. It had the right weight, perfect color combination and it moved like a distressed damsel begging for it. 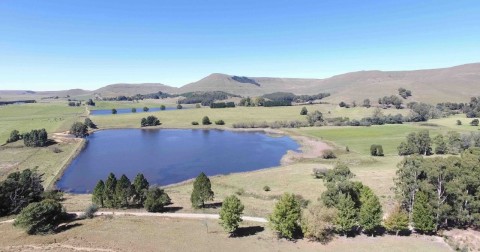 In a single day it accounted for more takes, charges and catches than I can recollect, forcing me to announce to my cabal of envious detractors that I had cracked the code. ‘Pack away your fly boxes with such pitiful imitations and pay attention!’, I preached.

It not only looked the part, but the proof was in my Trout pudding, behold……the pictures were circulated faster than the latest Zuma joke and elicited nearly as much interest as some of the more nubile photos that adorn our whatsapp group. I have never had such an undisturbed satisfying sleep.

After toying with the idea of applying for an honorary appointment to the international fly tiers guild, I was back on the water the following day dispensing advice to Jeremy with a wry air of indifference.

And I patiently waited until another half a dozen fish had been landed, before indulging in a big slice of humble pie.

‘What’s the fly ?‘ I begrudgingly asked.

The MGB will mean nothing to you, as most fly acronyms do, to those that did not give them a title, but over course of the morning Jeremy proceeded to teach me yet another lesson.

I managed a Trout or two on my new “infallible” pattern, but was properly whipped and suitably contrite.

After much conferring, what was of noteworthy interest was that regardless of pattern, the majority of Trout were charging at the fly on the hang or by inducing the take. Just lifting your rod, right at the end of your retrieve, bringing your fly up through the water column……..the trout were chasing and smashing it right on the surface.

This was especially apparent when fishing into a weed bed, that was inaccessible from the bank.

My preference is terra firma but to not have a float tube when exploring a dam is really handicapping yourself.

Oh, I’ve also come to the realization that you never really invent a fly pattern, you only build on another’s foundation, stealing good ideas and giving it your own personal twist………thankfully fly patterns can’t be patented!